Nuclear power is essential to meet the global energy demand.

The current energy development director of the FAYAT group and president of the French Nuclear Suppliers Association (GIFE) is a man belonging to the limited circle of nuclear experts. A graduate engineer and physicist, Christophe Béhar has held the positions of Director of Materials and Environmental Monitoring at the Defence Division of CEA (DAM) and then Director of the Research Centre CEA/DAM-Ile de France. He was subsequently appointed Director of the Nuclear Energy Division at the French Atomic Energy Commission (CEA). Today, he defends nuclear energy with the necessary scientific rigour and the modern and open-minded approach required to fully understand the new environmental challenges.

The increasing world population will also drive the demand for energy. How will nuclear fit into the upcoming energy mix?

The nuclear sector is not, and will not be in the near future, leader of the energy mix. When looking at the growth of the world population, of a continent such as Africa, for example, which currently has more than one billion inhabitants and a projected figure of 2.5 billion by 2050, we can easily understand that the energy demand is going to explode. Electrical energy is and will remain one of the most sought-after forms of energy throughout the world. Numerous studies forecast that, still by 2050, the world energy demand will increase by between 30 % and 40 % compared with the current level.

Its increase is quite simply due to the population growth. If we draw a curve, with the megawatt hours consumed per inhabitant on the y-axis and life expectancy on the x-axis, we see that it rises sharply and then becomes almost asymptotic. Life expectancy is closely related to electrical energy consumption. People want to live better, in better health and longer, which is quite human. Long live the Electric Fairy! But nuclear energy involves a certain degree of technicality. It is much easier to run power stations using coal or other CO2-generating fuels. Consequently, to fight effectively against global warming, since countries with high population growth do not all have the technology required to operate power stations, the industrialised countries must invest in nuclear to attempt, whenever possible, to counterbalance the use of fossil fuels in the developing countries. In France, nuclear provides 75 % of the energy demand and the multiannual energy programming law plans a 50 % decrease. In the United Kingdom, the nuclear share varies between 24 and 25 % and will have to increase to meet demand. In the United States, it only amounts to 20 %, despite the 93 reactors in operation. The figure in Russia is 27 % and less than 25 % in Japan. In industrialised countries, nuclear is not the primary energy source. Obviously, there is a margin for manoeuvre.

What are the future possibilities for nuclear?

In their nuclear catalogues, the major countries propose three different power levels. The EPR (European Pressurised Reactors) for France, the SMRs (Small Modular Reactors) so important to the French President and, for some countries, the FNRs (Fast-Neutron Reactors). We have 19 nuclear sites in France and I cannot see the French government opening any new sites. Since our energy requirements are going to increase, we will decommission the existing installations to replace them with high-power reactors such as the EPR II. I think that SMRs are more an export product and not intended for France, except perhaps for a first-of-series reactor. The emerging debate is nevertheless only just starting. There is undoubtedly a trend to build low-power reactors, of 100 to 300 electric megawatts. We are left with the third offer, the new 4th generation fast-neutron reactor (RNR) prototypes. Although their development was stopped in 2019, the French Parliamentary Office for the Evaluation of Scientific and Technological Choices would like to see them brought back in the debate. The “2050 energy futures” report published by the RTE (electricity transmission network operator) demonstrates the growing importance of the energy debate in the next presidential election campaign. These issues will be discussed at length over the next few months and the next few years.

Since our energy requirements are going to increase, we will decommission the existing installations to replace them with high-power reactors such as the EPR II

As president of the GIFE, the French Nuclear Suppliers Association, how do you think SMEs will fit into this vast transition and modernisation trend?

The rank 1 countries have already started. Currently, for example, the CIVIL engineering companies are working on the EPR II and making proposals to EDF. In France, however, what will make the nuclear industry move forward, regarding nuclear reactors, is the decision which could be taken by the French government to build the first six EPR2s, started two at a time, which will be of enormous benefit to the French nuclear supply chain. For the time being, in-service support of the reactors, the major overhaul, does the job. Remember that the Flamanville EPR has not started, only those of Taishan in China are operating. OL 3 in Finland has started the fuel loading phase. As I mentioned earlier, these worksites are extremely technical and are now essential to tackle the major environmental issues facing us. Global warming raises the issue of renewable energies. Less CO2 and therefore less coal, gas and oil used for large-scale electricity production. However, since neither solar nor wind energies can produce and store electricity on large scale, it is absolutely critical to keep the nuclear sector under optimum operational conditions. Highly qualified skills are therefore required, at every level. The supply chain must propose innovating, adapted solutions.

Lemer Pax recently create a new lead-lined bunker for CEA Tech, designed for non-destructive testing. A sure-fire source of value added for the region and the sector.
READ MORE 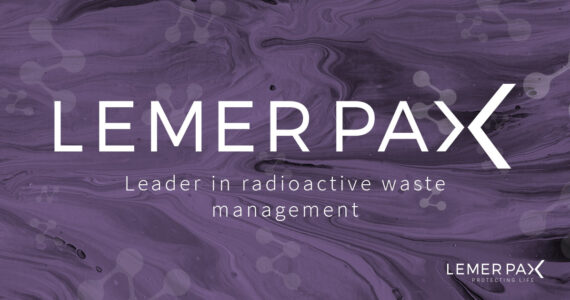 The management of radioactive waste, coming from nuclear imaging services, is becoming a crucial issue.
READ MORE
BACK

Lemer Pax respects your privacy
Lemer Pax and its partners use cookies or similar technologies and process personal data that can be crossed with information provided as part of our services for the following purposes: improving your user experience, carrying out audience statistics and studies to improve our offers, offer you services tailored to your interests, display targeted advertisements on our site or those of partners, measure the performance of these advertisements, use precise geolocation data, offer you functionalities relating to networks social, fight against fraud. Some cookies are necessary for the site and our services to work. You can accept, manage your preferences by purpose or continue browsing without accepting.
Cookie settings
Allow all cookies
✓ Allow all cookies
✗ Continue without accepting
Google Tag Manager
This service can place 22 cookies.
Read more - View official website
✓ Allow
✗ Reject
PRIVACY POLICY